Dr McLagan and his family lived next door at 54 and 56 Ravensdowne.
In the 1881 Census, 54 Ravensdowne is named Dr McLagan's Sick Entrance and 56 is named Dr Fraser's Sick Door. Both were occupied by Dr Phillip McLagan from Edinbro (Edinburgh), a widower aged 62 and his children: Jane 30; Margaret 28; Georgina Johnson 24, Charles George 21, a student of medicine;.Euphemia 16,  Patrick Johnson 15 (scholar). There's also Jessie Mace McLagan 27 (born Berwick), their cook and domestic servant and Margery Gladstone McLagan 15 (born Newcastle on Lyne), a housemaid. 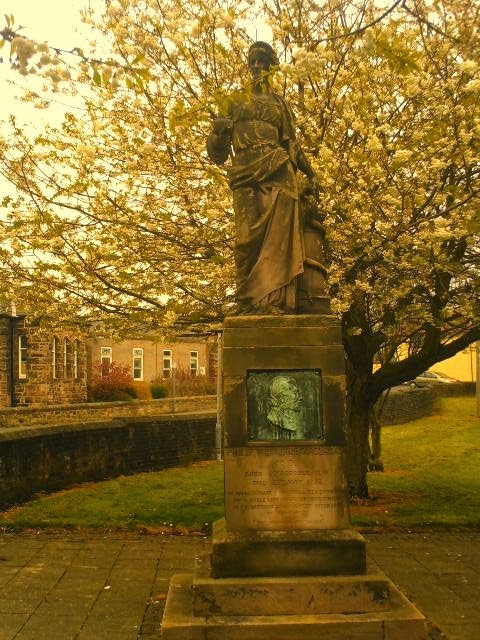 There's a statue of Hygeia (the ancient Greek goddess of health, daughter of Asklepios, the god of medicine. Her godly charge was cleanliness and how to live a long life) in Infirmary Square, Berwick on Tweed. 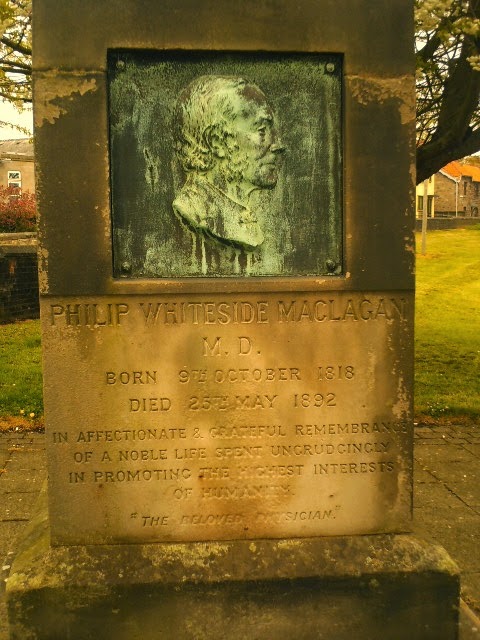 On the side of this statue is a weathered bronze plaque with Dr McLagan's head facing right and a memorial below:
PHILIP WHITESIDE MACLAGAN
M.D.
BORN 9TH OCTOBER 1818
DIED 23RD MAY 1892
IN AFFECTIONATE AND GRATEFUL REMEMBRANCE
OF A NOBLE LIFE SPENT UNGRUDGINGLY
IN PROMOTING THE HIGHEST INTERESTS
OF HUMANITY
"THE BELOVED PHYSICIAN"

Philip McLagan was the son of David McLagan and Jane Whiteside.
He married Margaret Johnston, second daughter of Dr George Johnston, in quarter 1, 1847 in Berwick. According to the 1861 Census, she was born about 1824 in Berwick. That census also shows other children not on the 1881 Census: Katharine C born about 1848, Susannah R, born about 1855; Philip S, born about 1859.
In the 1871 Census,  the doctor, his wife, Katharine Charlotte, Margaret, Georgina,  Euphemia,  Patrick Johnson are present but Jane, Charles George, Susannah R (appears to have died quarter 4 1861) and Philip S are not.
Margaret Johnston (MacLagan) died quarter 2 1874 in Berwick.
Philip is named as a joint Great Western Railway shareholder with John Renton Dunlop who died 18 April 1869.

I find it interesting that Jane and Margaret were born in Canada, and the remaining children born in Berwick.
When did Philip and his wife go to Canada, and was it while he was an army surgeon ?
Are Jessie Mace and Margery Gladstone Phillip's nieces ?
Did Susannah R McLagan and Philip S McLagan die before the 1871 census ?
It's interesting that in some records the surname is McLagan and in others, MacLagan.

If you're related to this McLagan family or Philip's mother, Jane Whiteside, or you can answer my questions, please leave a comment.
Posted by Unknown at 01:26