In my blog, John Hamilton Hall - Dangerously Assumed to be Unique, I noted that the Guild records show the admittance of John Hamilton Hall on 24 October 1840, when his occupation was Capt, East India Company.
The huge and powerful British East India Company was originally formed to trade with the East Indies but at different times traded not only in India and Sri Lanka (Ceylon), but also in Hong Kong, Burma, China, Indonesia, Malaysia, the Philippines and Singapore. By 1840, the Company ruled large areas of India and other places with its own private army and navy exercising military power and assuming administrative functions which lasted until 1858.
After that, its military and administrative powers came under the rule of British colonial power  - the 'Government of India' and the records of the Company before 1858, and of the Government of India up to Indian independence in 1948 are collectively known as the India Office records housed by the British Library.

The Families In British India Society (FIBIS) have indexed a huge amount of the India Office records and their database search is easy to use.

I searched for John Hamilton Hall on FIBIS and was delighted to find a reference to a cadetship application, however, was it the right one ? FIBIS states that images are viewable at FindMyPast.

The record should be visible at Find My Past but isn't, it's missing; as I later found out by phoning the British Library, it got missed out of the digitisation.

However, the diligent British Library staff kindly photocopied the application.

It's a preprinted application form with blanks for answers. 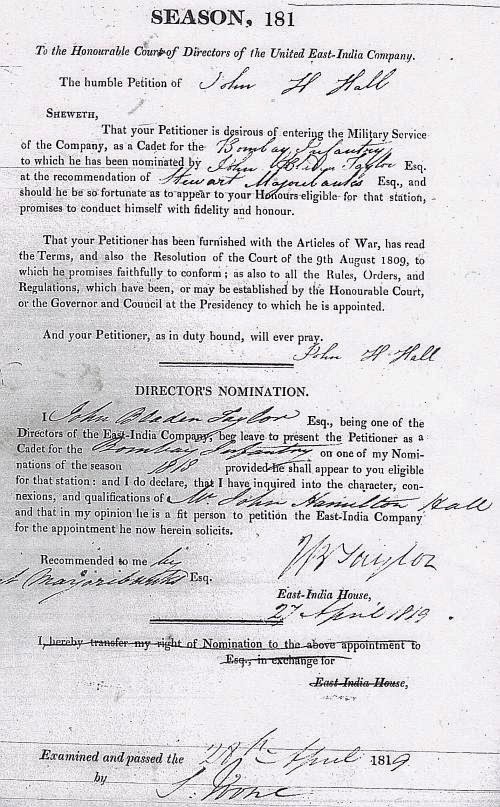 Page 1 shows the application from John Hamilton Hall, as a Cadet for the Bombay Infantry, nominated by John Bladen Taylor at the recommendation of Stewart Marjoribanks. It's signed by JB Taylor and Stewart Marjoribanks and dated 27 April 1819. I've used italic below to indicate handwritten entries. 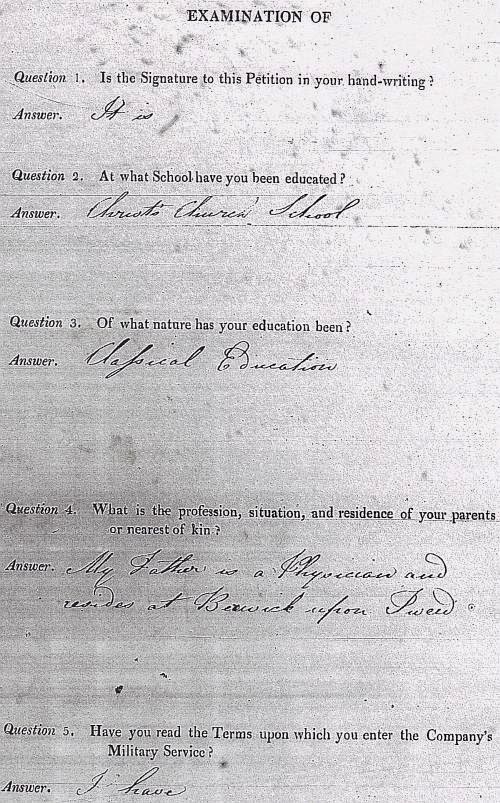 Page 2 asks questions
Question 1: Is the Signature to this Petition in your hand-writing ?
Answer: It is

Question 2: At what School have you been educated ?
Answer: Christ's Church School

Question 3: Of what nature has your education been ?
Answer: Classical Education

Question 4: What is the profession, situation,  and residence of your parents or nearest of kin ?
Answer:  My Father is a Physician and resides at Berwick upon Tweed

Question 5: Have you read the Terms upon which you enter the Company's Military Service ?
Answer:  I have 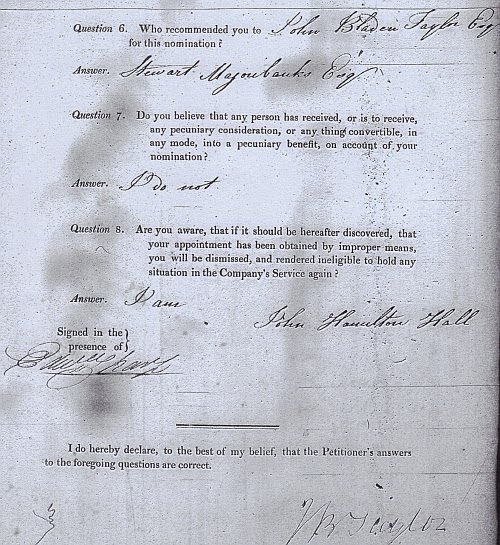 I've left out questions 7 and 8 but note the applicant's signature.

It's followed by a handwritten letter: 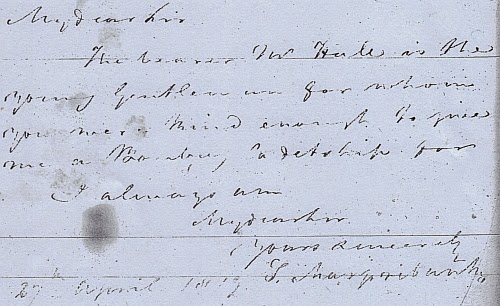 My dear Sir,
The bearer JH Hall is the young gentleman for whom you were kind enough to give me a Bombay Cadetship form
I always am,
My dear Sir,
27th April 1819
Yours  sincerely
S Marjoribanks

Also in the application are some preprinted forms:


British India was divided into three territories (called Presidencies): Bombay, Bengal and Madras.
Bombay covered the smallest area in the west of present-day India, extending through Sind and to the coastal area of what is now Pakistan and also included Aden (now Yemen).

I wondered whether John would have gone first to be trained at the East India Company Military Seminary (Addiscombe Military Seminary), Addiscombe, Croydon, Surrey but I don't see his name in the cadet records.