Looking through the roll of the Berwick-upon-Tweed Guild of Freemen admitted in the 19th century, one occupation stood out. John Hamilton Hall's occupation was stated as Captain, Honourable East India Company; he lived in Ravensdowne. 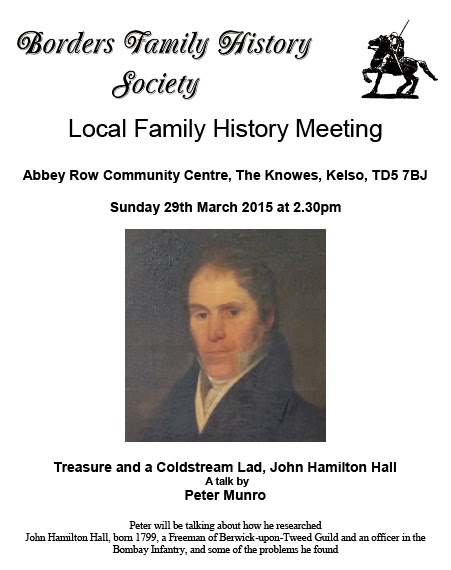 This was part of the research I did for Berwick 900 last year and this led me to research him further.

He was born in Coldstream in 1799, but his father was a general physician in Berwick and a Freeman. Seeing his name and occupation in the Guild records led me on an interesting but puzzling hunt for information about his family, his career as an officer in the East India Company’s Bombay Infantry.

However, just as importantly, I’ll be discussing how I researched him, some of the problems I found and the difficulties in reading and understanding the records. I'll also be discussing some of the online resources I used, so at the very least you should leave with a better understanding of researching your ancestors in British India.

The talk has been widely advertised so come early to get a good seat. I warmly invite you to attend the talk whether you are a member or not.

We'll have a range of family history publications available to buy, and there’ll be light refreshments (donation expected) available after the talk.

If you have a problem with your family history, please discuss it with one of our volunteers
Posted by Peter Munro at 20:48