From Robin Connel:
My parents, Norman and Peggy, had no prior connection with Berwick when they arrived in the town during the darkest days of the war in 1940.
I doubt whether either of them had ever been in the town before.
.
My father had been appointed Manager of the National Bank of Scotland branch which stood at the end of the old bridge.

With two young children, a house to be found, a new job and a world war raging I often thought that they could not have had a much tougher start to their life in Berwick.

The Bank found them a house at 3 Castle Terrace and that was to be our home for the next 26 years. Until the house was ready for occupation, we lived in Lovaine Terrace for a few months.

Norman joined the Royal Observer Corps and for the remainder of the war he helped to man the observation post at the top of Halidon Hill, spotting for enemy aircraft passing overhead. The post was manned 24 hours a day and many a night time shift would see him arrive at the Bank somewhat bleary eyed the next morning. Among his fellow observers were Tom Purves (Paxton & Purves), Ted and Ivor Smith (TC Smith & Son, Solicitors) and Stanley Aitchison, the confectioner.

There were a number of well documented occasions when enemy aircraft actually dropped bombs on the town – on one occasion, a bomb landed in a field half way up Castle Terrace. This was exciting for us children who were blissfully unaware of the seriousness of what was happening.

On the day that victory in Europe was declared the pupils of Struan School in Northumberland Avenue, which I was attending at the time, were graciously permitted to go home early. We all jumped over a wall - which we were normally strictly forbidden to do - and raced home to tell our parents! The wall railings had been removed to make into bullets and other armaments.

After the war I was dispatched to boarding school in Edinburgh and my parents got down to the serious business of immersing themselves in the activities of the town. Norman in particular as a local bank manager became involved in many activities. He was Treasurer and a Congregational Board member of Wallace Green Church for 17 years as well as Treasurer of the local RNLI and Cancer Relief branches for many years. He was also a member of the local Rotary Club while Peggy belonged to Inner Wheel.

On the sporting side they were both very active in tennis and badminton circles and played these games to quite a high (county) standard. In these days the local churches had their own badminton clubs and Wallace Green competed successfully with my parents leading from the front. They were also instrumental in forming a private tennis club which played in the Meadows on an old court which the members acquired and restored.
Among the many friends they made in tennis and badminton competition were Jock and Joyce Edney who were easily the most accomplished in both sports. It is hardly surprising then that their great grandson, Andy Murray, has achieved so much in world tennis.

The Berwick Rangers Football Club were customers of my father’s Bank and in his capacity as their bank manager he would regularly attend home matches and see the gate takings (meagre as they were!) safely into the Bank. I can recall accompanying him on many occasions to Shielfield Park and, most famously, to the game when they knocked Rangers out of the Scottish Cup.

In 1962, the Mayor, Councillor Eric Mackay, invited Norman to be his Sheriff for the ensuing year. Appreciating this great honour he had no hesitation in accepting the invitation. There then followed an extremely busy period in my parents’ lives but a fitting tribute to the esteem in which they were both held within the town. My father carried out his duties with great aplomb supported by my mother to the best of her ability as she was much less comfortable in the public spotlight.

In 1966, Norman retired from the Bank and he and Peggy moved out to Horncliffe to live in a new bungalow “Braeside” which they had had built to their specific design over the previous year. The house overlooks the river on the English side of the Border just up the road from the ‘chain bridge’. They shed most of their local activities but retained the many friendships which had been formed over the 25 years or so of wholehearted involvement in the affairs of the town.

After nine years of contented retirement tending his sizeable garden and making the occasional trip into town, Norman sadly passed away suddenly following a heart attack. Peggy continued to live at Braeside for a further five years before she also died after a long battle with cancer. Their long connection with the town had finally come to an end.

Inevitably my own connection with Berwick ended at this point. I was already living on the other side of the country and three years later I emigrated to Australia. To this day I still retain the fondest memories of growing up in the town and through the BerwickAdvertiser website I continue to follow news of the town and fortunes of its football team on a weekly basis. 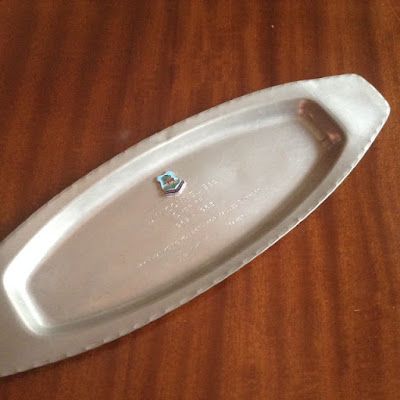 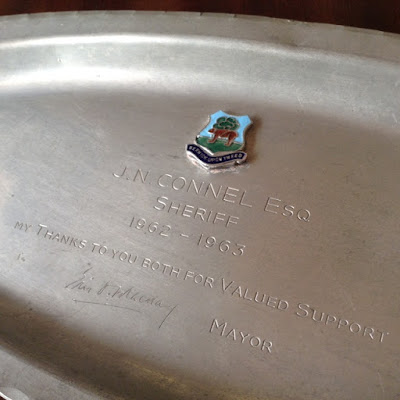 The inscription reads: J.N. Connel Esq, Sheriff 1962-1963 My Thanks  to you both for VALUED SUPPORT (signature of Eric Mackay) MAYOR