Researched and written by Julie Gibbs.

[This production, performed as a "radio play" in Berwick Guildhall on 25 April 2015 at Discover Berwick’s First World War Story and is a shorter version of that presented by the Lowick Heritage Group in December 2014, with a cast of five: Richard Black, Sarah Burn, John Daniels, Rev Victor Dickinson, Amanda Worlock.]


Narrator
During this performance you will hear from some of the local characters who chivvied, reported and helped in both personal and official capacities and from a refugee herself.

Newspapers played a vital role in emphasizing the fate of ‘poor little Belgium’; the needs of the brave Belgian refugees and our duty to help.  From August onwards, appeals appeared on behalf of the Belgian Relief Fund, set up to help those still in Belgium; and for hospitality in Britain, for those forced to leave their homes.

The thousands that came from Ostend and Flushing, through the ports of Folkestone and Tilbury were received by the Government in London and provided with accommodation until they could be allocated places in the country.

The Aliens Restriction Act, 1914, prohibited aliens from living in an area running inland for a distance of 10 miles and upwards, for almost a continuous chain on the east coast of England and Scotland, to prevent German spies from impersonating Belgian refugees. Northumberland to comply, established ‘colonies’ in Allendale and Hexham and other nearby towns. Any aliens already living in a restricted area could remain but had to register with the local Police. The Northumberland, Newcastle and Tyneside Belgian Refugees’ Committee complained in December, that they had many more offers of hospitality than refugees. They expected five hundred to be in the county by the end of that month but could accommodate more. 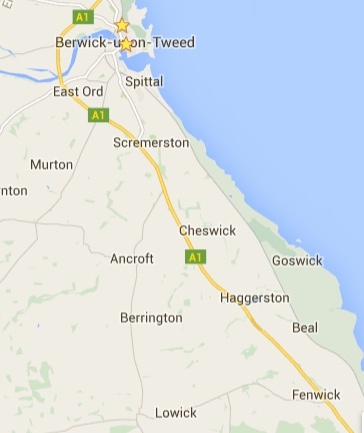 Berwick and the surrounding villages were quick to offer assistance. In September, the Mayor started a Borough Subscription List for the Relief Fund for the Belgian Nation; while the Sheriff asked for offers of hospitality in Berwick-upon-Tweed and its neighbourhood.

Mrs McCreath, of Ord Villa, collected a large amount of clothing for the refugees, which she forwarded in two wooden boxes, to London, for which she received grateful thanks.

Where it is not possible to offer hospitality to a mother and children, one lady might pay the rent for two or three empty cottages in a Berwickshire village. Others could then provide furniture or a regular supply of food, such as bread, milk, and eggs; while others again could make or buy clothing for the refugees. With a little organisation a scheme of this sort, might be started in every village in the county, and I am quite sure many willing helpers would at once come forward. All that is needed is one energetic lady in each village to get the scheme started.

Collections were taken at every gathering, religious or social.  The Berwick Cycling Club held a Smoking Concert in September, to raise money for the Belgian Relief Fund. It was attended by Mr Jacques Jobe, a mining student at Liege University, who happened to be staying in Berwick with his uncle, Mr Simmen, Confectioner Maker and Caterer. Mr Simmen from Switzerland and his wife from Belgium had both become naturalised citizens in 1902. Mr Jobe, who played the Belgian National Anthem at the concert, will feature later. Over £5 was raised.

A correspondent writing for the Berwick Advertiser 9th October 1914 will take up the tale.

Within the past week, forty Belgian refugees have arrived at Haggerston Castle from Beal Station. They have been quartered on the estate, at Lowick, and the farm of South Berrington, occupied by Mr Middlemas. Among those on the estate is a woman with a family of six children, three little girls and three little boys. There is also a boy of fifteen from Malines working with the gardeners on the estate. He seemed to be quite happy and pleased to be working with two Englishmen. Asked why he had left Belgium he merely replied he had to fly because the Germans were coming. The boy could speak French fluently, but the majority of the refugees in the district mainly spoke Flemish. Mr Jobe paid a visit to the estate and conversed to the best of his ability with the mother of the six children. They are staying in a cottage and before the door, the Belgian flag was flying. She said her husband was working at the Central Station Antwerp. While Mr Jobe was cycling down the drive, his handkerchief, which has the colours of the Belgian flag on it, was fluttering from his pocket, and five little boys – belonging to another family – who were sitting on the grass at the roadside stood up and raised their hats. Mr Jobe asked them where they had come from but as they spoke Flemish he could not get a direct answer, but they managed to explain that they had come from a house in the country, probably a farm. At South Berrington there is one family consisting of a husband and wife and two boys aged 15 and 17.  Mr Demant, a Technical Translator, brought them from Newcastle and interpreted between them and the farmer. The husband and the two sons were cabinetmakers. Mr Middlemas was in Belgium recently, but left when war was declared.

Great excitement prevailed in the village of Lowick last Thursday evening, when the Belgian family of refugees, comprising husband and wife, husband’s mother, and five children arrived. Their presence in this quiet little village has made the effects of this Great War clearer than ever before. Deepest sympathy is extended to them in their sad plight, because evidently they had to leave their home that would be very dear to them, with just what they were wearing. They came from close to Antwerp, and if anyone had an interview with them who could speak Flemish, they would probably have a story of the great sufferings they endured before arriving at a haven of safety.

It is to be hoped that their sojourn in Lowick (be it long or short) will be happy and pleasant, because without a doubt our safety in a great measure is due to the Belgians staying the initial advance of the Germans at a great loss of life. They kept the door shut so to speak until the Allies were better prepared. So let that sacrifice be repaid by one and all of us giving what we can to help them in their time of need.
Posted by Peter Munro at 14:20