The Brigham Family of Tweedmouth

Gail Petrov and Beverly Brigham from Canada write:
Our Brigham roots stem from East Yorkshire, to Holy Island, on to Fenwick
(Kyloe Parish) then to Tweedmouth.
In 1911, our great grandfather, James Brigham, emigrated to Canada.

William Brigham, born 1833 in Fenwick (Kyloe Parish), married to Mary
Hudson, was part of a family joinery business.  The joinery was started in
1782 by his grandfather, John Brigham, in Fenwick.
William eventually took over the Joinery with his sons, John and James.
By 1889, they were in Tweedmouth residing and operating the joinery workshop
on Main Road, Tweedmouth.
After William's death in 1904, 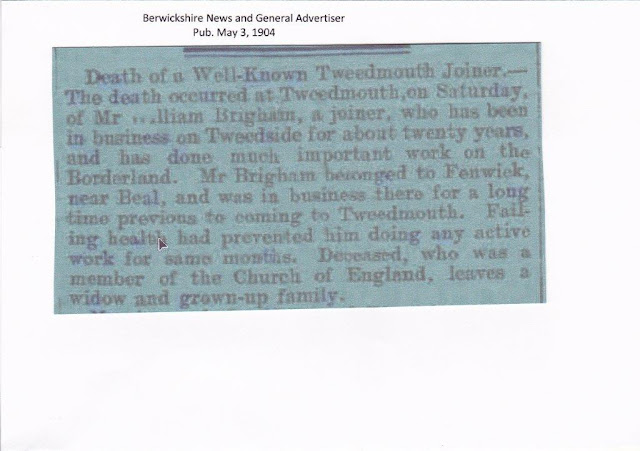 the sons took over the business but in April 1911, dissolved the partnership.   John continued to reside in Tweedmouth and operate the business until it closed in the mid-1940s.  James emigrated with his family in May 1911 to Canada.

On 11 May 1911, James with wife, Mary Lightly Brigham, daughter Mary and youngest son James left Glasgow, Scotland, on the ship Saturnia.  They arrived in Quebec, Canada on 14 May 1911.

James is listed 19 May 1911 in the Britain, Trade Union membership registers, union branch Winnipeg, which shows he continued his joinery trade.

Their other 4 sons remained in Tweedmouth with their grandmother, Agnes
Rutherford.   On 27 April 1912, the boys and their grandmother left Glasgow, Scotland on the ship Hesperian, arriving in Quebec, Canada, on 6 May 1912.

It was a short family reunion as James died on 2 December 1912 in Winnipeg.

During World War I, James' eldest son, William, enlisted 11 January 1916 and was sent overseas.  He was seriously wounded on 16 September 1916 at the Battle of The Somme, at Courcelette, losing his right eye and later having his right foot
amputated.

Another son, Charles, enlisted 17 April 1918 and also served overseas in
World War I.