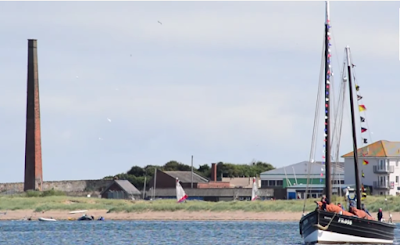 As well as nice views of the quayside and the harbour, there's views of the nice food stalls on the quayside taking part in the Mouth of the Tweed food festival celebrating food that is harvested, grown or produced in the Berwick-upon-Tweed area.

On the quayside, that group of red tops and red caps is Prior Park First School there to entertain the crowds. The camera shifts to the Tweedmouth Watchtower and the Silver Shiels and Salmon Darlings exhibition with history displays about fishing and craftswork and paintings related to fishing: fishes, nets, a huge collage of fishes in the waves. Next comes Spittal Promenade with glimpses of Tidal's contemporary dance depicting the sea and River Tweed, then the Tweedmouth Feast carnival parade through the streets of Berwick, Tweedmouth and Spittal. There's commentary by Berwick's Mayor, Hazel Bettison, too.

Several views of people avidly reading the displays in Berwick's Maritime Connections Exhibition at Berwick Guildhall on 18 July, where volunteers were collecting family stories mainly about salmon fishing around Berwick and herring fishing inhabitants in the Greenses area of Berwick. More views of the town are followed by a pipe band leading the procession to the crowning of the new Tweedmouth Salmon Queen, Shannon Blackhall.

The video closes with the departure of Reaper.