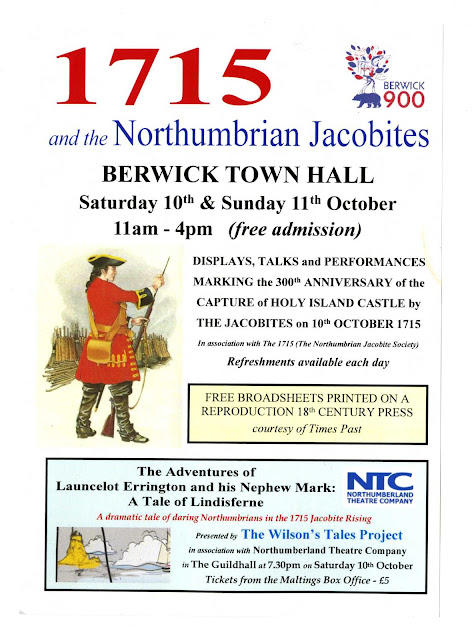 This weekend, there's another Berwick 900 event commemorating the 300th anniversary of the capture of Holy Island Castle by the Northumbrian Jacobites in 1715 and the blowing up of houses in Castlegate, Berwick.

The event is at Berwick Town Hall, Marygate, Berwick-Upon-Tweed,TD15 1BN. Map. Admission is free and it runs from 11am to 4pm.

The Fifteen (The Northumbrian Jacobite Society) will have a stand.

Saturday:
Impromptu drama scenes in and around the Town Hall based on the inquiry into the Erringtons' capture of Holy Island Castle.

2pm A talk "The 1715 Rebellion from the Berwick Archives perspective" by Linda Bankier.

Sunday
There will be three dramas based on the inquiry into the Erringtons' capture of Holy Island Castle.  These will take place in the courtroom upstairs from the big hall at 12.30, 1.30 and 2.30pm.

Also, the Wilson’s Tales Project have arranged for Northumberland Theatre Company to do their stage version of ‘Lancelot Errington: A Tale of Lindisfarne’ (about the Northumbrian Jacobites) at Berwick Town Hall on 10th of October at 7.30pm. Tickets are £5.

More information and a booking link.

Elsewhere, at 2 Hide Hill, a replica 18th century printing press will be producing copies of an A3 broadsheet and handed out free of charge.
The press will be open from 11am until 4pm on Saturday and 11am until 3pm on Sunday.


Was your ancestor one of the Northumbrian Jacobites ?

Was your ancestor's house blown up ?
Posted by Peter Munro at 13:22