With common names, John Smith, Fred Brown, James Hogg, there must be thousands of individuals.
Adding a middle name reduces the number of possibilities and adding a rare middle name must reduce them still further.

When I chanced across John Hamilton Hall son of John Hall (deceased), admitted to Berwick-upon-Tweed Guild on 24th Oct 1840 with the occupation of Capt, East India Company, I thought this would be an easy person to find, an interesting person, and no competition from people with the same name.

How wrong I was.

The details below refer to the son of a physician who was a Freeman of the Guild (as I've been researching him for the Berwick 900 project).

His parents were John Hall (the physician) and Mary Dickson.
He was born, 22 Oct 1798; baptised, 8 Nov 1798 in Coldstream (Berwickshire, Scotland.)
The Guild records show the admittance of John Hamilton Hall (2nd son of John, deceased) on 24 October 1840. His occupation is shown as Capt, East India Company.
He married Ann Grieve in September 1841 at Easington, Co. Durham, about 80 miles south of Berwick-upon-Tweed.

Interestingly, Ann Grieve was the daughter of a Berwick-upon-Tweed Guild Freeman.

In the London Gazette Issue 21658 published on the 6 February 1855. Page 12 of 40, his promotion 'To be MAJORS in the East Indies.' was listed as
Capt John Hamilton Hall, Bombay Infantry.

A search on Families In British India Society (FIBIS) showed a transcription from Allen's Indian Mail - the 16 February 1865 edition about his death on 10 February 1865 at Portobello. http://www.fibis.org/

The family tree is: 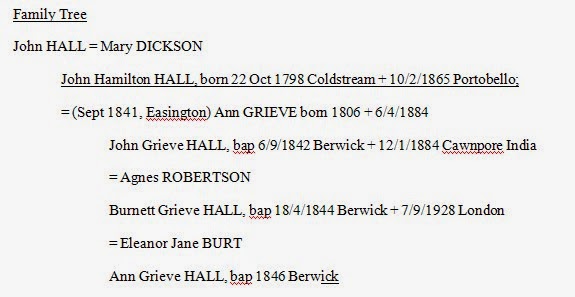 There are lots of questions that occur to me:

If you know the answers to these questions or if you're related to any of the people named, please leave a comment.
Posted by Peter Munro at 18:07