Salmon fishing on the Tweed – now coming to Spittal ! 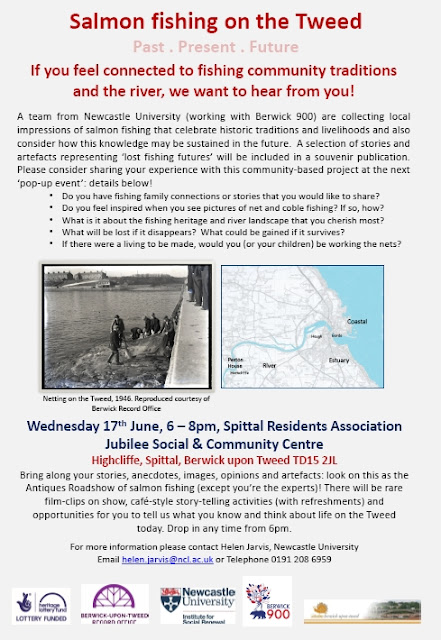 From Helen Jarvis:
A recent public event celebrating local impressions of salmon fishing and the river Tweed caused quite a stir in the function room of The Pilot Inn, Low Greens.

The event attracted a dozen or so local residents, many bringing with them faded news cuttings and documents recording historic family connections to the netting industry.  Several former Berwick residents travelled in from as far away as South Tyneside to share childhood memories of growing up in a fishing family.  Adding to the lively mix were contributions from those who were enjoying a quiet pint at the bar who came in to browse the displays out of curiosity.  Each came with their own motivation to view rare film clips, photographs and quoted anecdotes and to share their passion for the river, the fish and the fishing.

This was the first in a series of ‘pop-up’ citizen-led story-telling events organised by a team from Newcastle University (funded by the Institute of Social Renewal) accompanied by local history experts representing Our Families (a Berwick Record Office, Heritage Lottery funded project for Berwick 900). 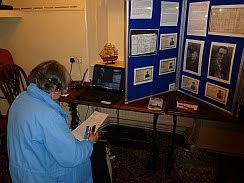 Advertised attractions included several rare film-clips (credited to the North East Film Archive, Berwick Record Office and local film-makers). These were playing on a continuous loop on computers with head-phones available for anyone who wanted to listen in to the likes of Richard Dimbleby, 1950, and Fyfe Robertson, 1959, talking to people in Berwick and Seahouses about Salmon Fishing.

A rich variety of narrative and visual media and a large-scale map of the Tweed prompted enthusiastic conversations and reminiscing. We heard about the hard working conditions of the netsmen “standing in the middle of the river in February- four hours twice a day and always shifting according to the tides” and the great flood of 1948.  One contributor brought along a pewter tankard presented by the Berwick Salmon Fisheries Company to commemorate the presentation of a Tweed Salmon to Her Majesty Queen Elizabeth II on 7th July 1956.

We also heard touching personal reflections of a childhood in which the salmon fishing “was part of our play-time- legs dangling over the side of the pier and always the oohs and ahhs when the fish were brought in”.  Some of the stories would benefit from additional local knowledge: does anyone recall, for instance, bringing salmon home for feast week in a purpose-made bag of women palm leaves? We have scope over this series of events to gather a more detailed picture of salmon fishing in the past together with opinions about how to sustain this local knowledge and expertise for the future.

The next event is at the Spittal Residents’ Association Jubilee Social and Community Centre in Highcliffe on Wednesday 17th June.  The session will be open between 6pm and 8pm. It will again feature the films and display materials.  Anyone who feels connected to fishing community traditions and the river is invited to come along to browse- or to bring along stories, anecdotes, images, opinions and artefacts.

Please come along to this event: everyone is welcome!
For more information on this and other events associated with the Salmon Fishing on the Tweed project, please contact Helen Jarvis, Newcastle University, email helen.jarvis@ncl.ac.uk or telephone 0191 208 6959.
Posted by Peter Munro at 02:05