Saturday 23rd May was the date of the annual general meeting of The Court of Deans of Guild of Scotland and was held in Berwick this year as part of the Berwick 900 festival.

Nowadays, the Court’s role is both charitable and ceremonial. The Lord President of the Court of Deans of Guild of Scotland for 2014/2015 was Captain James Evans, who was Chairman of the Guild of Freeman of Berwick-upon-Tweed.

The Presidency rotates each year over the 11 localities. My tiny part in this year’s celebration was to translate some of the laws of the burghs and the Guild into modern English.

There's much more to learn about Leges Quattuor Burgorum (the Law of the Four Burghs) but here are my translations of a few of the laws. In the examples below, each law is stated in medieval Latin, followed by medieval Scots, then comes my translation.

Law 9    Of merchandise that arrives by ship 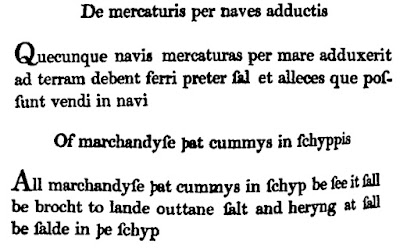 All merchandise that arrives by ship shall be brought to land except salt and herrings which shall be sold on board. 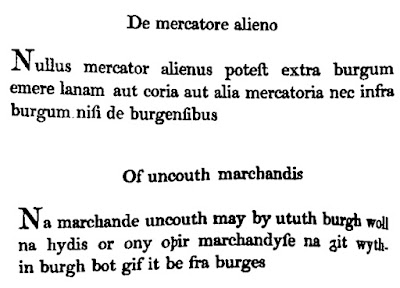 No strange (non-burgess) trader may buy wool, hides or other merchandise outside the burgh, unless it’s from a burgess.

Law 20 Of making of cloth and dyeing of wool 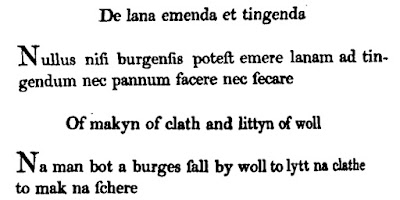 Only a burgess shall buy wool to dye or make into clothes or to cut up.

Law 36 Of annual rent of brewers 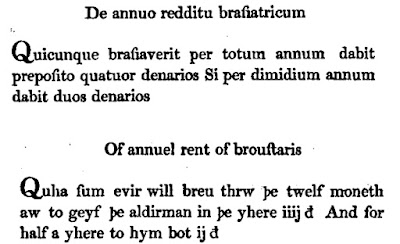 Whosoever will brew throughout the year will pay the alderman 4 pence, and for half a year, 2 pence.