This follows on from James Evans article about the Statutae Gildae (Guild Laws); here are my translations of a few of the Guild laws.

Note that these laws are of the laws of the Berwick-upon-Tweed Guild; other guilds probably had similar laws but may have had other laws different to those of the Berwick guild.

In the first 2 examples below, each law is stated in medieval Latin, followed by medieval Scots, then comes my translation, for the third law, I could find only the Latin in a 19th century book.. 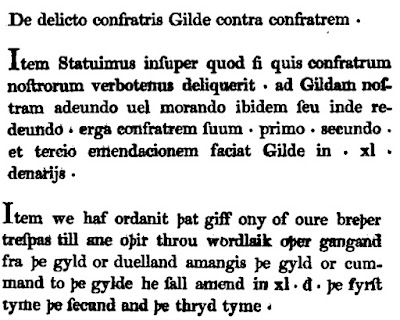 We have ordained that if any of our brothers trespass against another through slander, walking from the guild, or duelling in the guild, or coming to the guild, he shall pay 40 pence the first time, the second time, the third time.

40 pence was a huge fine, it would have bought 40 chickens or 30 gallons of ale.

Law 10    Of forfeits belonging to the Guild light 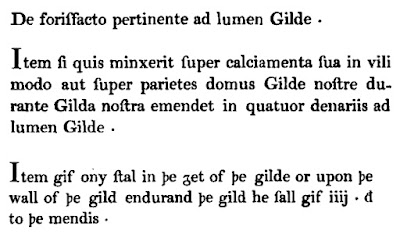 If any urinate in the entrance of the guild or the wall of the guild, he shall pay 4 pence in compensation.

Law 21   Of Burgesses being without a horse

We ordain that any burgess having £10 in goods shall have in his stable a seemly horse worth at least £2. And if he be deprived of his horse by any chance, death, sale, gift, or in any other manner, he shall within 40 days provide another.    If not, he shall be fined eight shillings to the Guild.